EXTRACT FROM JANE’S FAME: HOW JANE AUSTEN CONQUERED THE WORLD 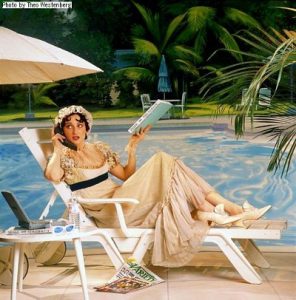 When Reverend George Austen died suddenly at home in Bath  in January 1805, aged seventy three, Jane lost both a beloved, like-minded parent and the best supporter of her literary endeavours. George Austen had been anticipating his younger daughter’s debut as a novelist for several years, but never lived to see one of her books in print. His death left the Austen women heavily dependent on the charity of the remaining Austen men, and Jane’s new situation, as an unmarried, unprotected and now virtually penniless twenty-nine year old was borne in on her forcefully as she and her sister and widowed mother moved to and from a series of rented houses in Bath and Southampton during the next four years, ending up sharing the home of her sister in law Mary and brother Frank (who, as a Captain in the Navy, was often on active service in the war with France at this time).

While it was clearly a time of retrenchment and change, Austen is unlikely to have given up her habit of writing in these years: it’s as unlikely as her not having written any letters in the same period. We just don’t have the documentation any more. The novel begun in Bath, The Watsons, had started promisingly, but was put aside after about 17,000 words. However, the watermark of another manuscript, the completed epistolary novel, Lady Susan, shows that it was written – or rewritten, or copied – in 1805. Scholars are divided on dating its origins; though there is no rule saying that authors all have to ‘progress’ from one mode to another, in form and tone Lady Susan seems to belong to the juvenilia rather than the mature novels, and the surviving 1805 manuscript is very clean (unlike The Watsons, which is full of evidence of working). The inference is that Lady Susan is older than its paper. Perhaps Austen meant to submit it for publication at this date, or change it more: it would, after all, have been odd to have two novels in circulation with such similar titles as this and Susan.

Austen clearly still had manuscripts going around the family, for their private enjoyment. Cassandra, who made a particular pet of their eldest niece Fanny Knight after the death of Fanny’s mother in 1808, must have shown the teenager one of Jane’s manuscript novels as a mark of favour and intimacy when she was visiting their brother Edward’s house at Godmersham in Kent. Responding to this news in a letter of January 1809, Jane makes some interesting remarks to Cassandra about this very small expansion of her readership. She feels her prose is already affected by the consciousness of an audience, and fears further ‘hurt’:

I am gratified by [Fanny] having pleasure in what I write – but I wish the knowledge of my being exposed to her discerning Criticism, may not hurt my stile, by inducing too great a solicitude. I begin already to weigh my words & sentences more than I did, & am looking about for a sentiment, an illustration or a metaphor in every corner of the room. Could my Ideas flow as fast as the rain in the Storecloset, it would be charming.   [24 Jan 1809, L 169]

Austen was perhaps feeling nostalgic for the helter-skelter brilliance of her youth, and the reassuring degree of control she used to have over her well-disposed home audience. There is a lot of freedom in being unpublished, and she had been unpublished a long time. Her letter also shows a deep self-consciousness about being entertaining, and making it look effortless. The metaphor of the rain in the storecloset is brilliant, not only enacting her self-critique of ‘looking about for an illustration in every corner of the room’, but suggesting what trouble such luck might be. Even more striking is the sense of watchfulness over her own development, a concern with the danger of falling-off, or stiffening. This evidence of writerly anxiety and self-monitoring, from an unpublished author, is surely very unusual. It shows how seriously Austen took her own vocation, published or not.

Click here to return to Jane’s Fame: How Jane Austen Conquered the World