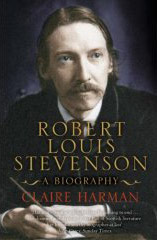 I had wanted to write a book about Stevenson in the early 1990s, but had difficulty persuading my publisher that he was a suitable subject; also there were several biographies rumoured to be in the works to coincide with the centenary of Stevenson’s death in 1994. I later found out that three of these phantom books were my own proposed one, so I had in effect frightened myself off.

But I didn’t regret the delay, for the centenary books (there were some real ones) all missed out on the new material contained in Ernest Mehew’s Letters of Robert Louis Stevenson, eight volumes of the most delightful writing and wonderful scholarship, published in 1994–5. Stevenson leapt off the pages, even more wild and funny and contradictory and clever than before, and Mehew’s footnotes were infinitely illuminating and suggestive. By the time I began my biography, yet more scholarship had been done, and there wasn’t any longer the likelihood of being told that Stevenson was ‘just a children’s writer’ and not worth investigating.

Robert Louis Stevenson was published by HarperCollins in the UK and the US, where it was titled Myself and the Other Fellow. The book was shortlisted for the Saltire Award in 2005, was a Waterstone’s Book of the Month and a BBC Radio 4 Book of the Week, read by David Tennant.

Click here to read an extract from Robert Louis Stevenson: A Biography

“a delight from beginning to end […] Stevenson has found a worthy biographer at last”
John Carey, Sunday Times

“it takes real skill to preserve a sense of overall shape, as Harman’s excellent biography does. Her judgements are crisp yet unobtrusive […], she allows Stevenson to bring himself to life, letting his peculiar sparkle flicker through”
Sunday Telegraph

“both the life and the writing are irresistibly entertaining”
Theo Tait, DailyTelegraph

“vivid and engaging […] Stevenson emerges from her pages as a vital, courageous, contrary and exhilarating figure”
Times Literary Supplement

Surprise Celebrity Endorsement!!  ‘[Claire Harman’s] book about Robert Louis Stevenson Myself and the other Fellow  is SO F*****G GREAT! Read it 4 times no joke !’  Evan Dando.

Other work on Robert Louis Stevenson by Claire:

Essays and Poems
Click here to read more at Amazon.co.uk

The Master of Ballantrae and Weir of Hermiston
Click here to read more at Amazon.co.uk

Dr Jekyll and Mr Hyde and Other Stories
Click here to read more at Amazon.co.uk

Articles about Stevenson by Claire: