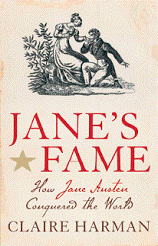 Jane Austen led a quiet and uneventful life and left behind very few clues to her private thoughts and opinions.  No diaries, no gossip, few letters – under the circumstances it has been easy and quite natural to idealise her, though many  readers (and biographers) have always longed to know more about the subtle and evasive mind behind the six beloved books.

I was motivated to write Jane’s Fame because I was intrigued by the stark contrast between her later celebrity and Austen’s own experience of authorship.  Not many people realize that Austen struggled for almost twenty years before she could get one of her novels published, and had little personal success in the few years she lived after that.  I wanted to take her out of the context we have fashioned for her and look at things from her point of view. The person who became the nation’s darling, ‘Divine Jane’, was for the most part an unread, unpublished and sometimes very unconfident writer.

Jane’s Fame is therefore partly an account of how Austen’s posthumous reputation took off in the nineteenth century, and went global in the twentieth, but also a look at the woman behind it all; the lonely and somewhat embittered possessor of great gifts, a satirist with no immediate audience. It deals with the critics, the fans, the films, the books, the bonnets, but comes back to the question of how this extraordinary author was overlooked in her own lifetime but slowly, miraculously and weirdly, tapped into timelessness.

The book was published in the UK on 2 April 2009 by Canongate Books and was a BBC Radio 4 Book of the Week.

Click here to read an extract from Jane’s Fame: How Jane Austen Conquered the World 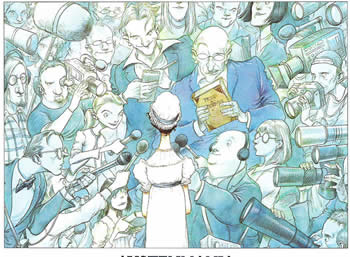 “Wonderful.. not only scholarly but indecently entertaining… her prose rings with good sense, affection and humour”
Sam Leith, Daily Mail

“An exhilarating look at the rise of Divine Jane’s worldwide influence. Harman charts its course with wit and style, as well as scholarly precision, making this a book that no Austen addict will want to resist”
Mark Bostridge, Literary Review

“Fascinating and sophisticated … a sparkling addition to the canon”
Evening Standard

“Splendid… Harman is the first to treat this fascinating subject in an accessible, lively manner unshackled by academic jargon”
Paula Byrne, Sunday Telegraph

“A fascinating compendium of absolutely everything relating to Austen…extraordinary”
Elspeth Barker, Independent On Sunday

“Harman unpicks the cultural and sexual fantasies at the heart of Jane fandom with great skill. … The material [she] has deftly put together makes two things strikingly apparent: no reading of Jane, however seemingly wayward, is a misreading; and Austen’s major effect is to inspire good writing”
Frances Wilson, Daily Telegraph 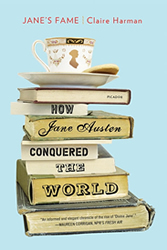 BookPage review of this edition, March 2010:
Click here to read

TLS podcast, 20 July 2017: Claire in conversation with Stig Abell and Thea Lenarduzzi on the occasion of the bicentenary of  Jane Austen’s death; ‘Freedom, Books, Flowrs and the Moon’ – click to listen

Guardian Review, 12 March 2007 – ‘Who’s that Girl?’ the auction in New York of the ‘Rice Portrait’, a disputed portrait of Jane Austen.
Click here to read article

TLS, 1 February 2008, ‘Partiality and Prejudice’: the young Jane Austen’s obsession with the Stuarts.

Evening Standard, 27 October 2011: ‘The Best to Pick Up Austen’s Pen’, review of Death Comes to Pemberley by P.D. Jame
Click to read article 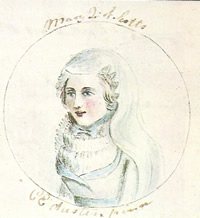 A Hidden Portrait of Jane Austen?

Is the portrait of Mary, Queen of Scots in Cassandra Austen’s illustrations to Jane’s juvenile ‘History of England’, a depiction of the 15 year old author? Click here to download the article, written as the postscript to ‘Partiality and Prejudice’ for the TLS in 2008 (see above).