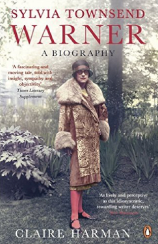 Being asked to write the biography of Warner back in 1982 was a life-changing event for me, and I was very fortunate in being allowed to take my time over it – seven years as it turned out. The literary executors had a schedule in mind, and some of the biographical material could only be published after certain people were dead. This meant I could carry on the research far longer than is normally possible – which was convenient, as my children were all very young – and though there were moments when I thought I would never finish the book, with hindsight I think it was a very  good way to write it. When I started, Warner was only recently dead, and it took a while to introduce myself into a group of rather disparate friends, enemies and family and to reconstruct the facts of her life. Just reading through her diaries took a couple of years, and finding the shape of her life and work of course took much longer. But nothing could have been more rewarding: Warner’s cast of mind and turn of phrase delight me as much now as ever. I think she is a pattern of female genius.

Sylvia Townsend Warner: A Biography was published by Chatto & Windus and Minerva in the UK. It was shortlisted for a number of awards, including the Yorkshire Post Book of the Year, and won the John Llewellyn Rhys Prize in 1990 for ‘a book of value from a writer of growing stature’.

It has been reissued in October 2015 by Penguin Books, with a handsome new cover, and is now also available as an e-book.

Click here to read an extract from Sylvia Townsend Warner: A Biography

“A living and revelatory biography, as passionate and truthful, elegant and enchanting as its subject. Claire Harman restores Sylvia Townsend Warner to her real place as, in her best works, second only to Virginia Woolf among the women writers of our century”
George D Painter

“A fascinating and moving tale, told with insight, sympathy and objectivity”
TLS

“Harman skillfully weaves Sylvia’s stories and letters into the biography, and the brilliance of the samples on display constantly takes you aback … Outstanding”
John Carey, Sunday Times

“Really interesting and totally gripping. It evokes a person and a period and a whole world in a very effective way”
Victoria Glendinning

“As lively and perceptive as this idiosyncratic, rewarding writer deserves”
New Statesman

Other work on Sylvia Townsend Warner by Claire Harman:

The Diaries of Sylvia Townsend Warner
Click here to read more at Amazon.co.uk

The New Collected Poems of Sylvia Townsend Warner was published by Carcanet Press on 28 March 2008. This is a significantly larger collection, with over 90 previously uncollected and unpublished poems, a new introduction, expanded notes and a chronology.

“One of the most important books of poems to be published in 2008”,
Essays in Criticism

20 March 2008: Woman’s Hour. A discussion of the poetry of Sylvia Townsend Warner and Valentine Ackland. 10.00am, BBC Radio 4.
Click here to listen

The Corner that Held Them
Click here to read more at Amazon.co.uk

Summer Will Show
A new edition of Warner’s 1936 novel, published by New York Review of Books Classics, with an introduction by Claire.
Click here to read more at Amazon.co.uk

The Flint Anchor
Click here to read more at Amazon.co.uk

The Salutation
Click here to read more at Amazon.co.uk