Extract from Murder by the Book 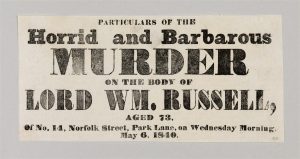 At about 11.50 p.m., the bell rang from the study: Lord William was going up to bed, late as ever. The valet filled the warming pan with hot coals from the pantry fire and took it up to the bedroom. He helped his master to bed, lit the rushlight and also, at his Lordship’s request, a candle so that he could carry on reading. Though there was a key on the inside of the door, his Lordship never locked it. Everything in the chamber was as it should be; the valet went to bed.

The street was quiet. The two constables on duty, Alfred Slade and George Glew, passed along it several times, one on each side, and reported nothing unusual that night. The smart new Peelers had taken over some of the duties of the old ‘street-keepers’ and so, as he passed 14 Norfolk Street, Glew tested the front door, and was later able to confirm it had been locked.

But in the middle of the night, two of the neighbours were alerted to something unusual going on. At around 2 a.m., Louisa Anstruther, the married daughter of Lord William’s immediate neighbour, Sir Howard Elphinstone, heard something through the bedroom wall that adjoined her own room, a groan or cry. She thought no more about it at the time and went back to sleep.

And across the road, a gentleman visitor at number 23 saw an extraordinary thing through one of the windows opposite, flitting across his line of vision, something that looked like the figure of a naked man. Perhaps this struck him as amusing at the time – someone else engaged in clandestine nocturnal activities, like himself. Though, of course, he wasn’t meant to have seen anything, wasn’t meant to be in Norfolk Street at all, visiting his married mistress in the middle of the night. He, too, put the incident out of his mind.

But at seven in the morning, Henry Lakes, the footman at number 22, was cleaning shoes below stairs when the bell rang furiously. By the time he got up the area steps, the caller had run on to the house next door. It was the housemaid from number 14, screaming at Mr Latham’s man, Daniel Young, about the house being robbed and her master dead. Somehow that night, mayhem and murder had come to their street.

Return to Murder by the Book